Easyjet 140 euros return ticket geneva -Reykjavik could not be ignored. I mean…Bjork… . My skiing social networks feeds are filled with Norwegian imageries and other exorbitant Svalbard dream trips. Iceland wins. This mysterious snowy volcano-island in the middle of nowhere way up north with unpronounceable words fascinates. The people seem to be very liberal not so narrow minded religious or sexists: not douchebags land. They came out of the economic crisis with pride bailing out the people and kicking out the banks: I appreciate that and happy to spend my money there. I talk to Ben Briggs who seems very enthusiastic. So much that he takes control of the entire organization. I end up in a RV with 3 funky Britts i don’t know and one crazy Czech guy. We didn’t have goals or objectives. We just heard tales of a big skiable volcano in the south west, legends of road side couloir descent to the ocean in the north and some vague descriptions about good stuff in the east. The RV is the best cheapest option we could think of for this type of trip. Iceland is a 1400 Km circle we can drive around and stop when we please. The best idea really: Iceland has natural wonders and curiosity at every turn of the road: water falls, hot rivers, fartsmoke machines, hot tubs and roadside ski lines. The highest mountains is a volcano in the south west , we were shut down by poor snow coverage and cold wind. After a long road and a blizzard we stick around the northern troll peninsula a few days hoping for a window to ski which never came. We managed a few descents but nothing great. The best was on our way back to Reyk thru the east where we found a pyramidal mountain filled with powdery couloirs. The trip was officially a ski trip but really ended up being a nice sometime hectic drive around a beautiful country with fun new friends, joking/goofing around, playing poker wilst discovering an enchanting island filled with geological oddities, dreamy landscapes, inter winded elements water fire ice earth all in one place. soothing energy. It felt like being in a pre-holocene time travel …I surely want to go back, the skiing looks promising there, nothing to bragg about just simple good fun skiing, ski in ski out from the RV in an very breathless landscape all around the island. People told me iceland was expensive however it wasn’t anymore expensive than chamonix for restaurants/bars or any supermarket in france, the rv was 2000 euro for 10 days rented at geyser rental at the airport. And well, i was happy to give my money given their political stance. The people are awesome and very helpful very happy to see you sometime with a zest of burly humorous cynicism . ….

Waking up in the south west desert at the foot of the highest volcano we want to ski with the unspeakable name: Hvannadalshnúkur 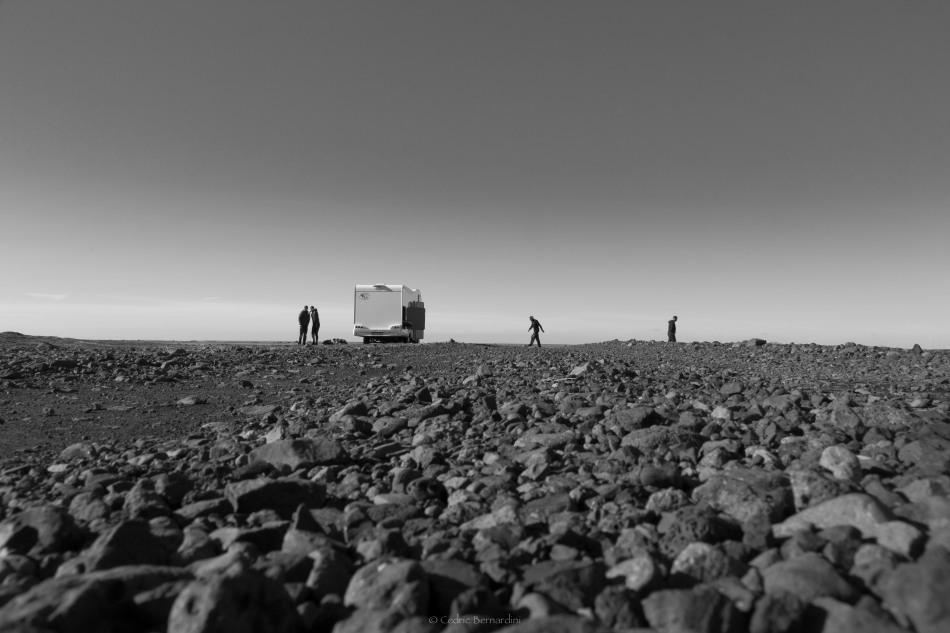 The line we wanted to ski, half in the shade. High cold winds and poor snow lower down shut us down 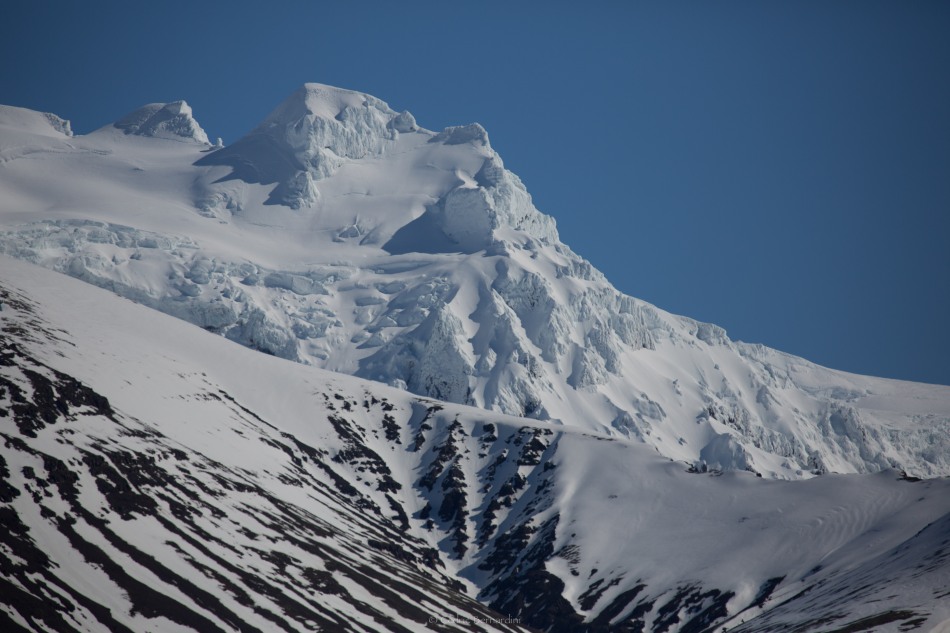 hiking skiing to the top 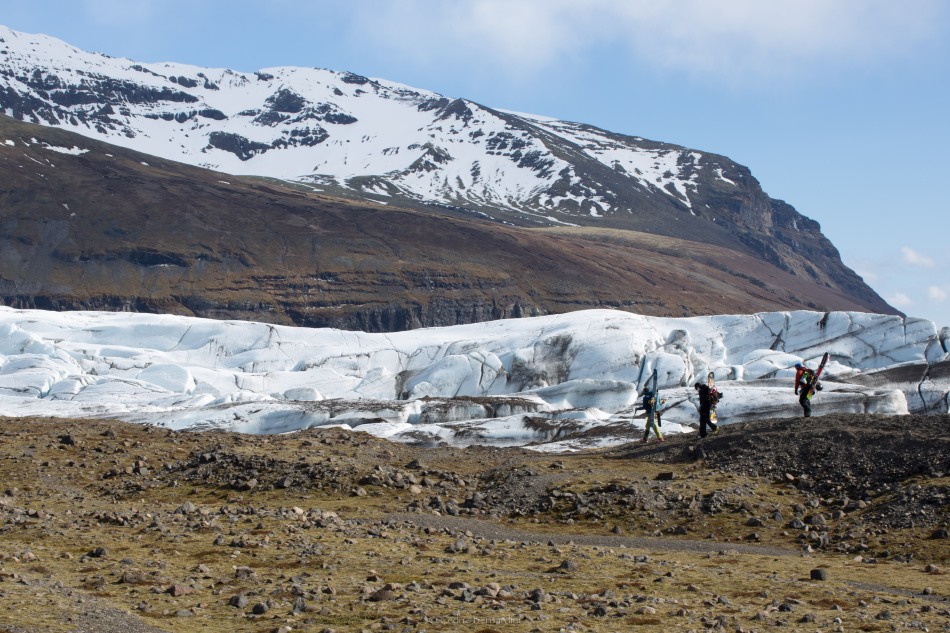 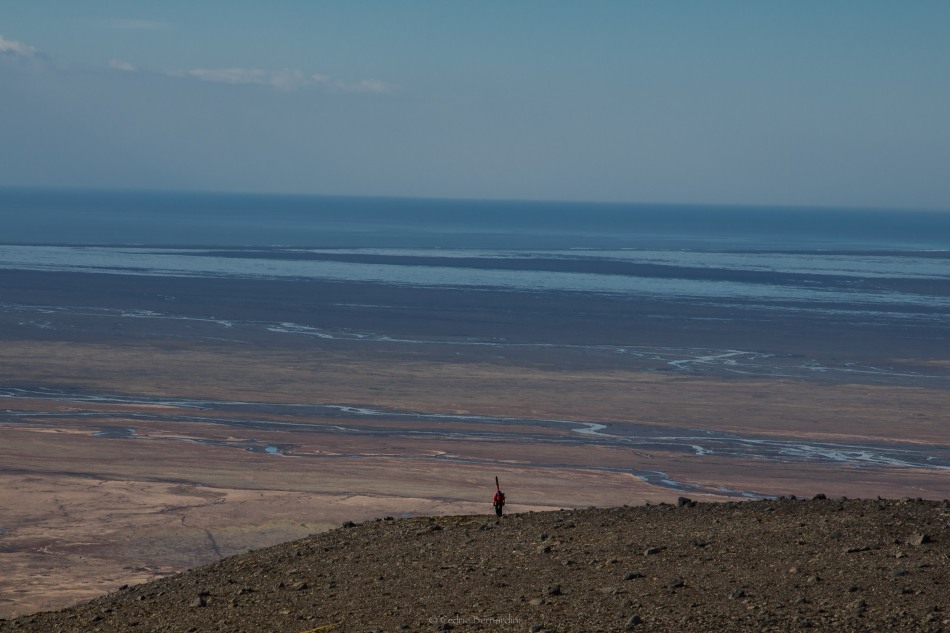 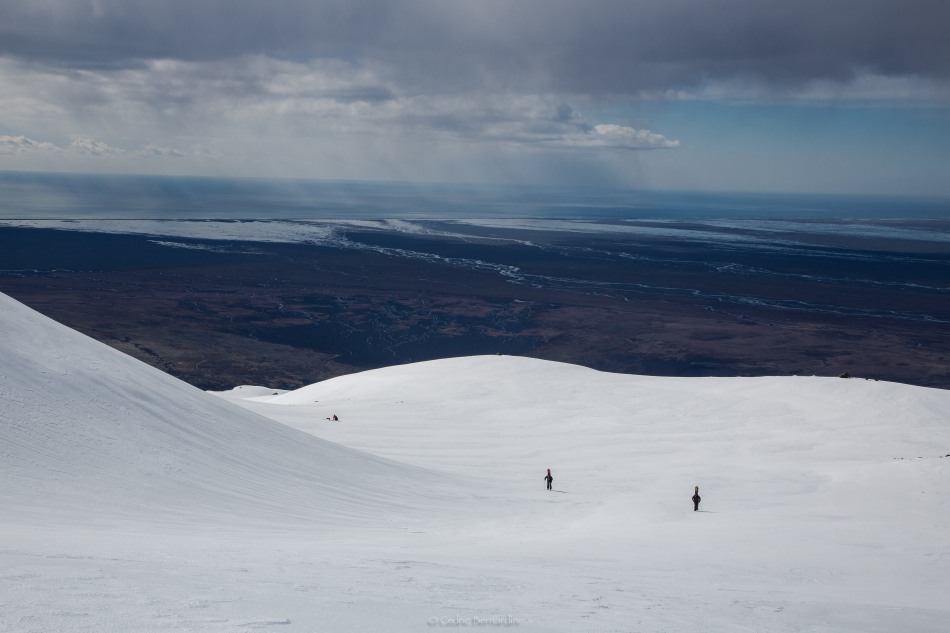 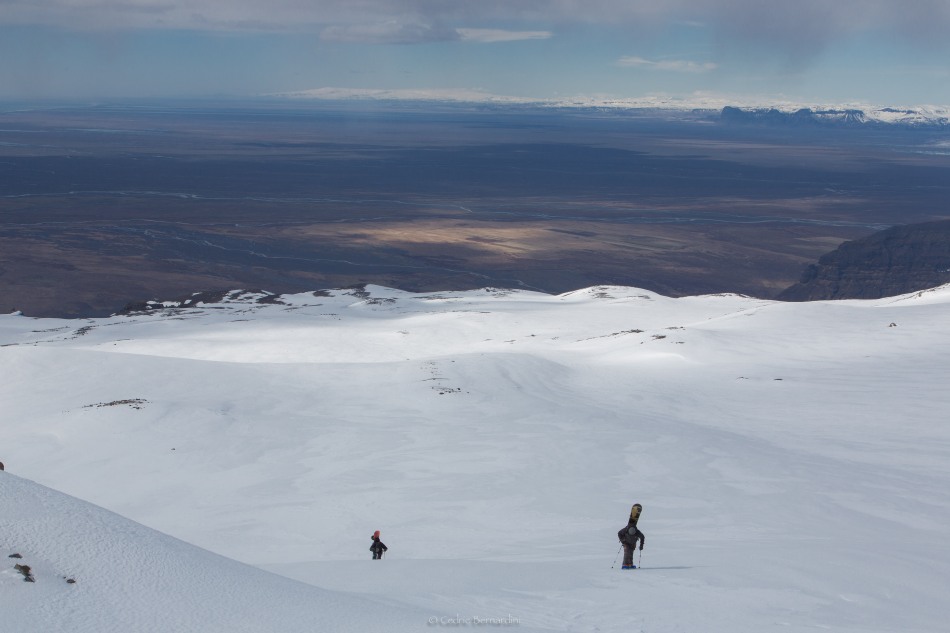 walking down hvannadalshnukur the highest volcano in iceland

Back on the road, pee/food stops.

fartsmoke machine along the way up north 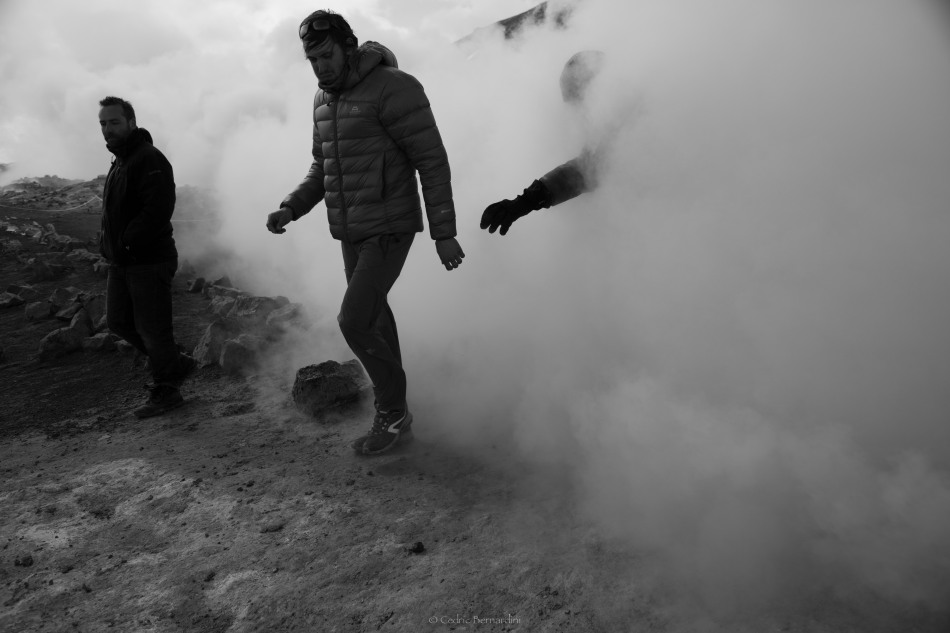 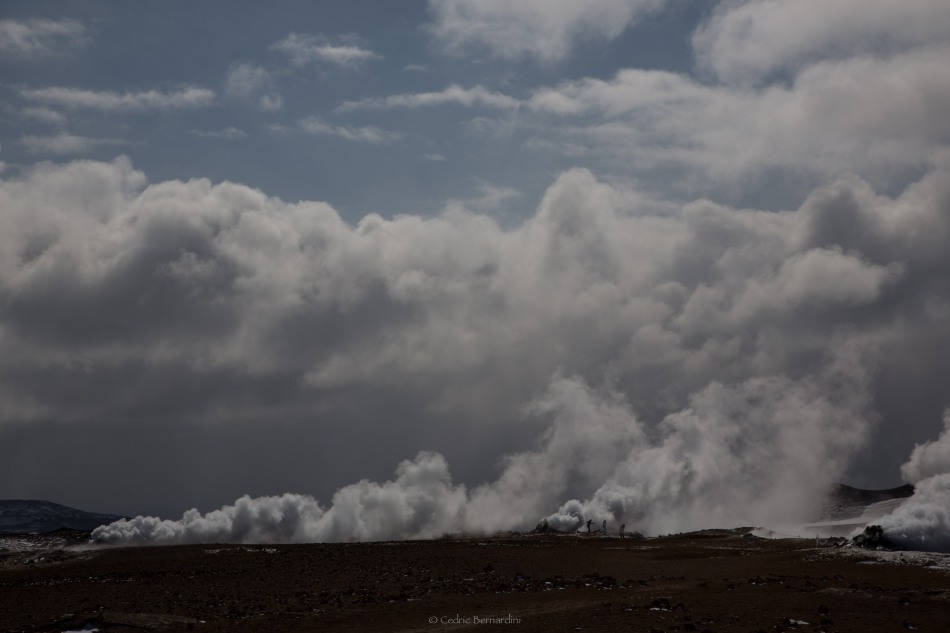 Random water falls on the road 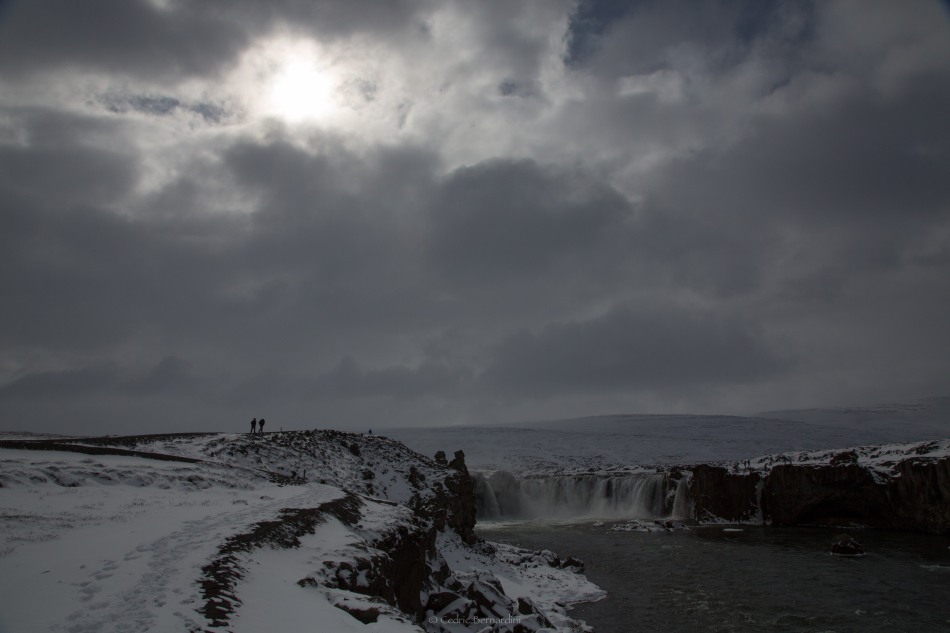 In the troll peninsula where we heard of roadside skiing to ocean and other splendid ski descent more inland. Unfortunately the snow coverage wasn’t optimum and we were there during a winter storm. It made it hard to move around with the RV. we still scored what we could. We didn’t have time to stick around and wait for weather to clear but I’m sure the skiing got pretty good there…

ben briggs coming from a run in iceland 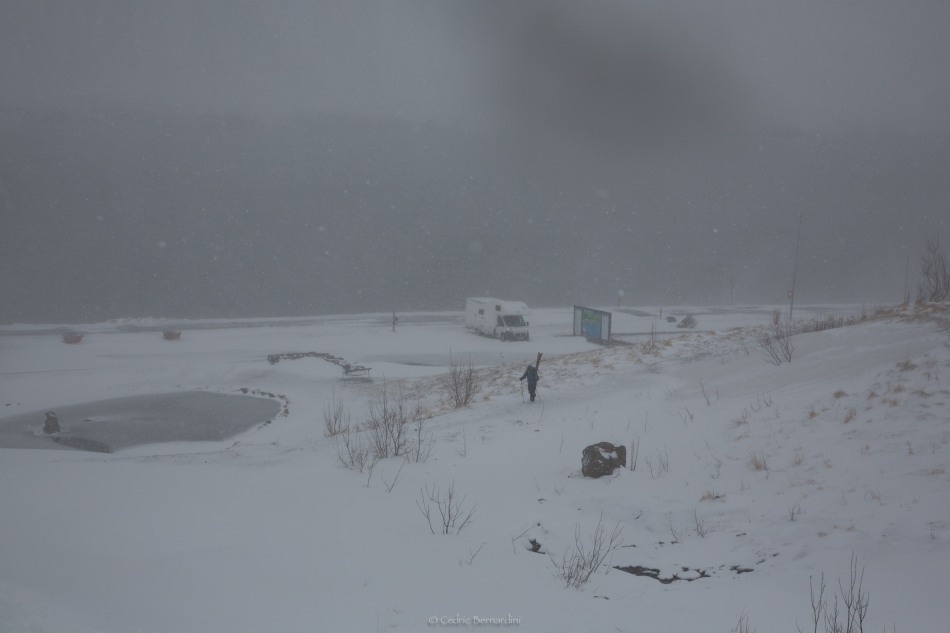 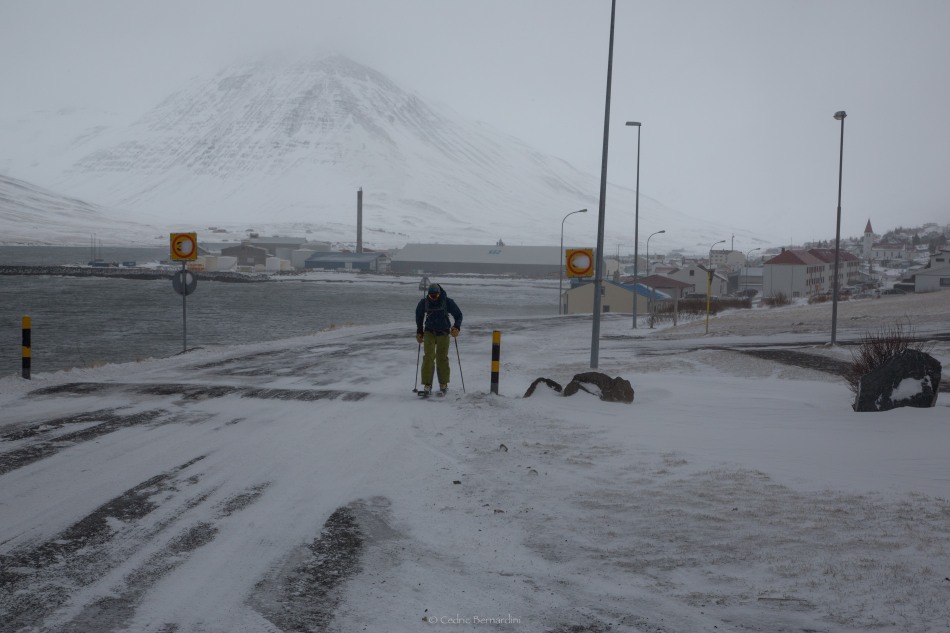 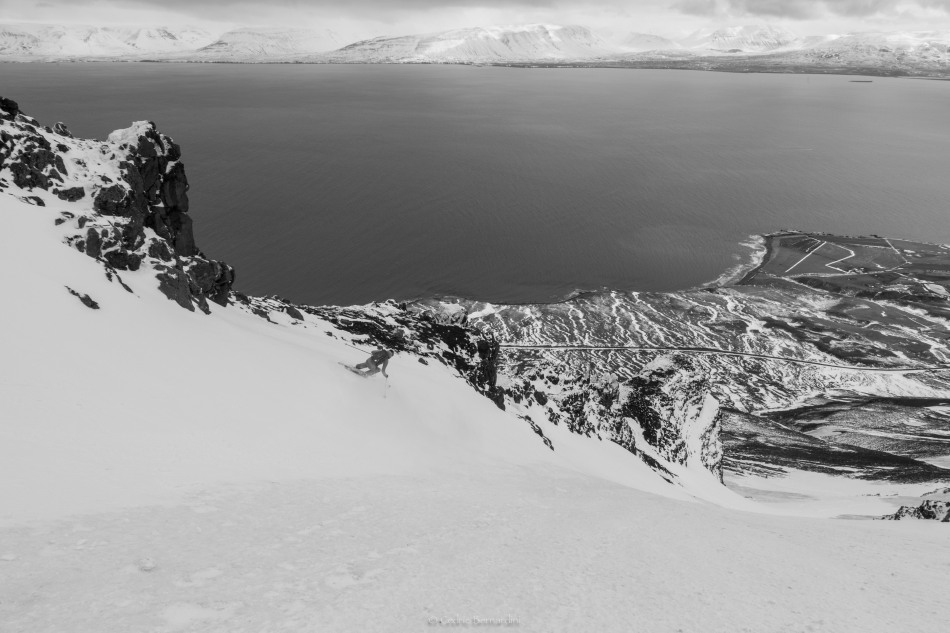 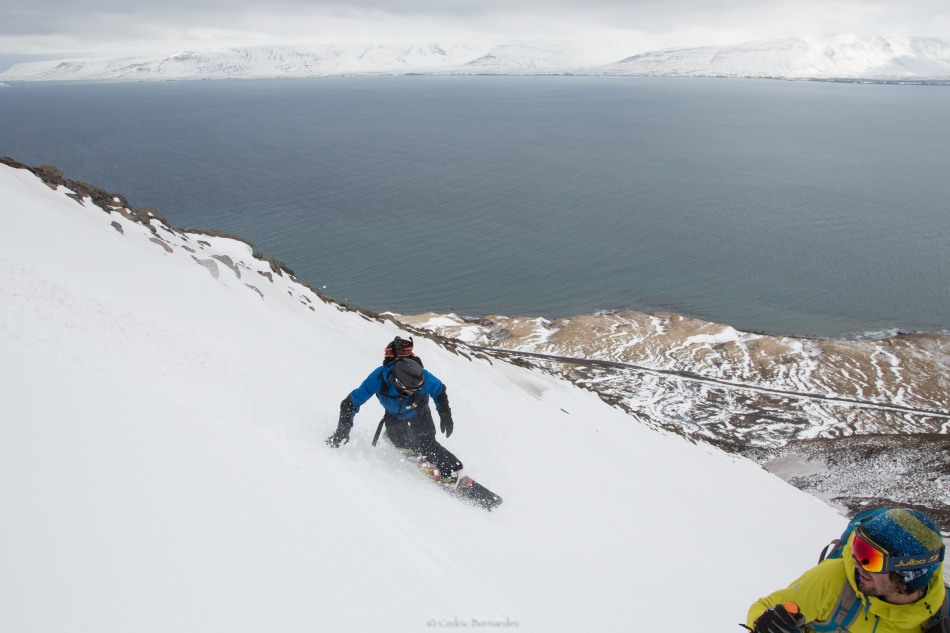 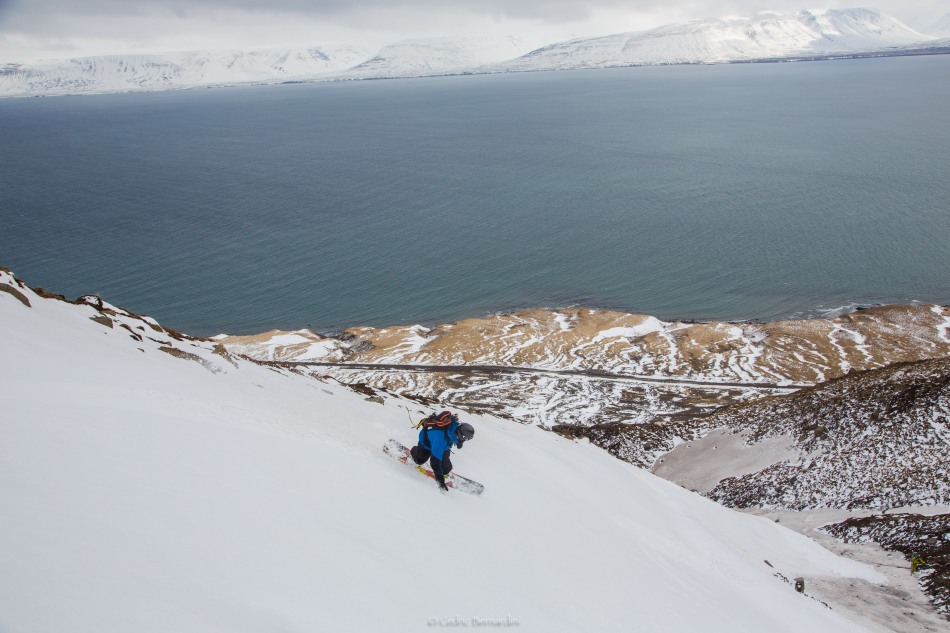 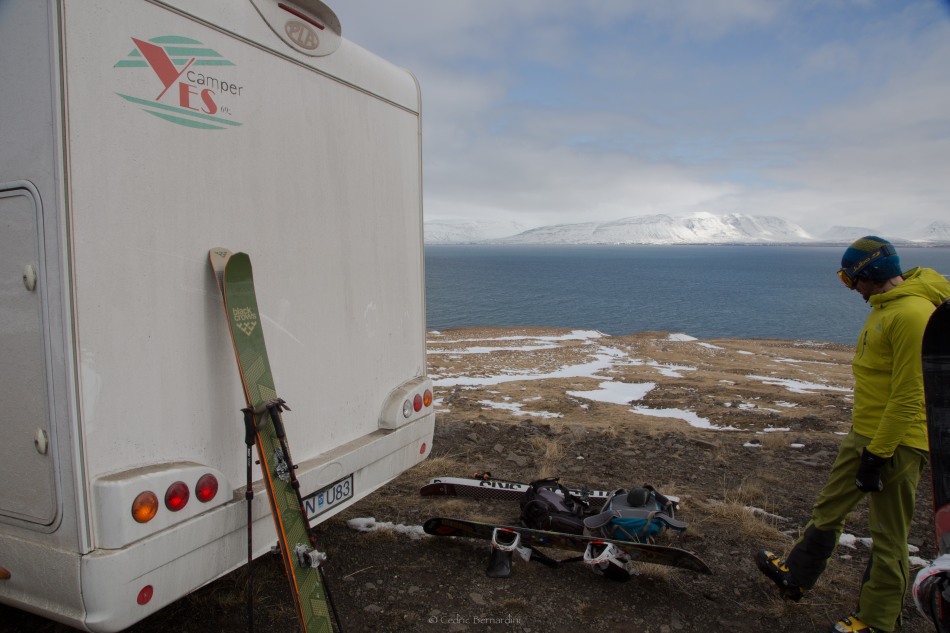 back on the road 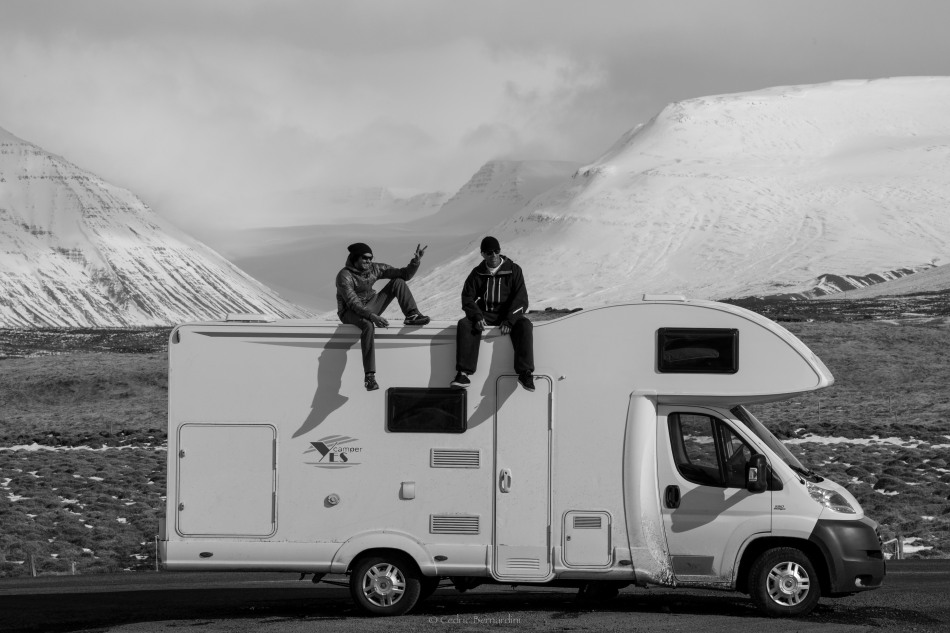 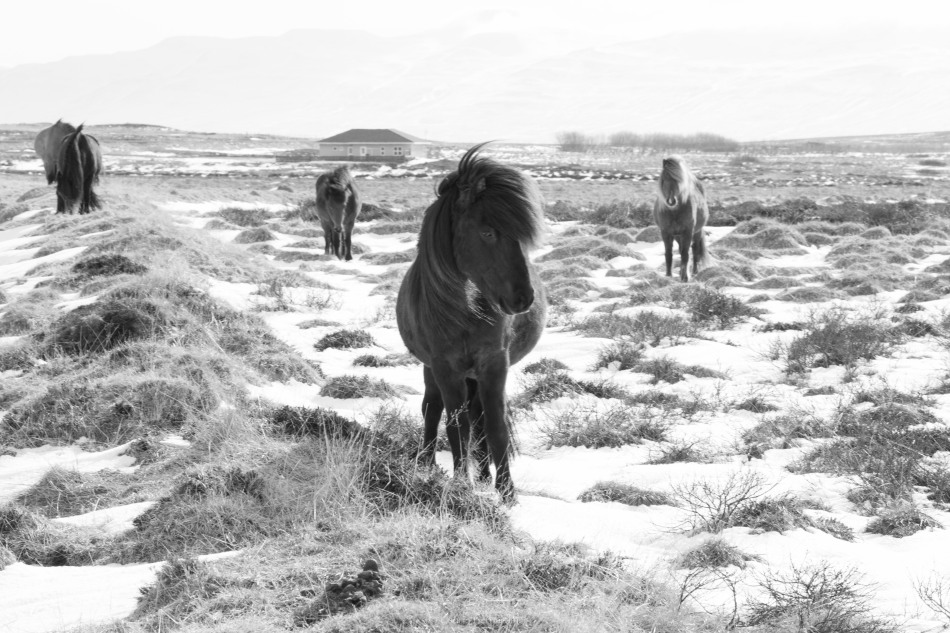 At the boarder of the south east and the troll peninsula, we finally found this mountain. It had about 10, 6-700 meters 40 degree couloirs all filled with powder. A very good finish to our trip. 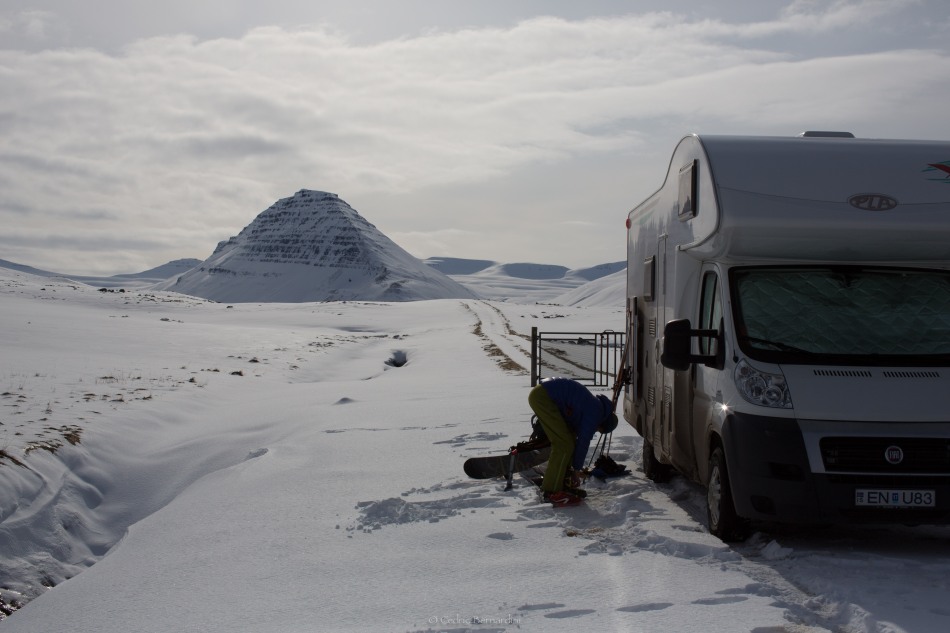 on the way to some powder in iceland 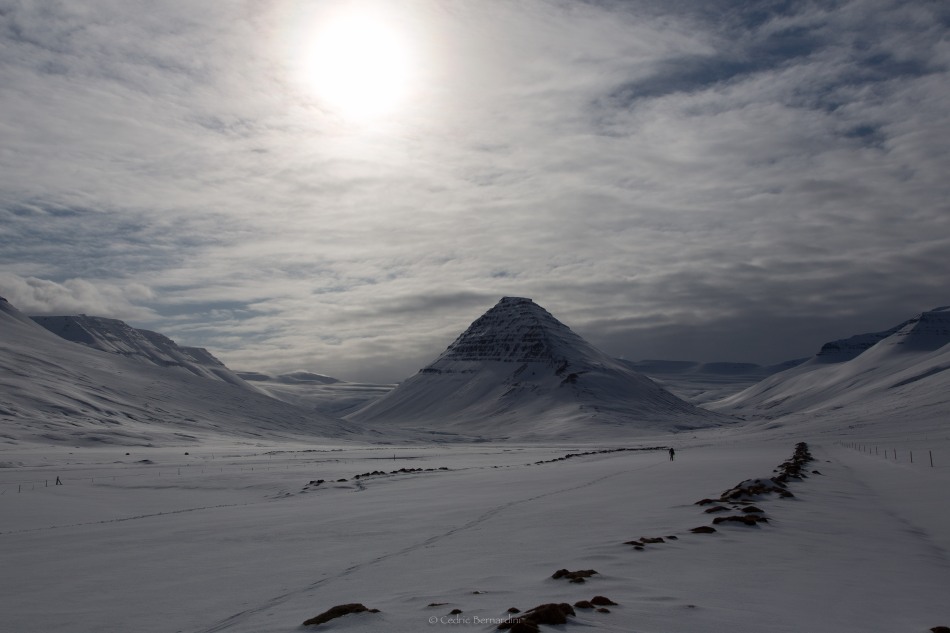 on the way to some powder in iceland

kinglsey young getting some easy turns in in iceland

there isn’t a bar or clubs in every town in iceland, but there are town outdoor swimming pool and tubs, naturally heated which makes it easier to roll around in a RV. There are also countless natural tubs and hot rivers…

This entry was posted on May 10, 2015 by cedricbernardini. It was filed under 2015, blogus, ski, travel and was tagged with 细雪, easyjet, 雪, 边远地区滑雪, iceland, mountains, scenics, ski, volcano, 山, 极限滑雪.